If you feel a little clueless when it comes to cryptocurrency, you’re not alone. The sudden and stratospheric rise of bitcoin and its ilk is all a little dizzying and unreal.

So you probably have some questions: Is bitcoin the emperor’s new clothes, or is it the ermine shawl of future millionaires? When a single bitcoin can be worth $10,000, then how could you possibly spend it? How much would a pint of milk cost? And can you use your bitcoin to pay for, say, a weekend getaway?

We’re here to debunk the enigma and claim some clarity on this very 21st-century concept of money – money that, perhaps, doesn’t really exist… Except that it does.

Let’s unravel this, shall we?

A cryptocurrency is an encrypted digital payment network. There are no physical notes or coins – it’s a currency that exists solely over an encrypted network of computers.

Are you still with me? Great.

Bitcoin was invented by a mysterious developer, known to the planet as Satoshi Nakamoto, which is a pseudonym. Nobody knows if it’s one person or a group. For ease, we’ll refer to Nakamoto as “they.”

Nakamoto wanted to create a currency that was not controlled by governments or corporations; which could be traded globally at no cost and without revealing one’s identity.

What is a bitcoin?

A bitcoin is a line of code with no physical tokens, a bit like your debit card. Once obtained, bitcoin are stored in a digital wallet, which is conceptually the same as a physical wallet. Bitcoin can be traded for services and goods, just like… well, money.

You may have heard the term “blockchain.” It’s an incredibly boring term, but you need to know it to properly understand bitcoin. Sorry.

What is a blockchain?

A blockchain is a ledger – a record of transactions.

Your bank keeps a ledger on you. It prevents you from “double-spending” – using the same units of currency twice. The blockchain is similar, only it is powered by a peer-to-peer network.

What is a peer-to-peer network?

You might have used a file-sharing application at some point. Remember Vuze, Napster, and Pirate Bay? If so, you’ve used a peer-to-peer (P2P) network to share files.

P2P is an online network of computers where users open up a part of their computer. With file sharing, it’s usually just a partition of your hard-drive. But in this case, users donate processing power as well as hard-drive space. And the processing power borrowed from the P2P contributes to the overall processing power of the blockchain.

A blockchain host on this p2p network searches the web using dedicated software so that they can find and bid for new bitcoin as they’re created. They’re rewarded in bitcoin for hosting the blockchain. This is known as mining.

P2P got a bad rap when Napster was shuttered because people were using it to illegally share copyrighted material, such as music, video, and application files. But there’s nothing illegal about P2P networks, per se, as long as the activity they operate is legal.

The P2P facilitates the blockchain, which records transactions with a date stamp, preventing double-spending, and we transfer bitcoin from our wallets to buy things. So, it’s a bit like… well, a bank.

So bitcoin is a like a bank, but it isn’t a bank?

Nakamoto described Bitcoin as a “peer-to-peer version of electronic cash,” facilitating online payments that don’t go through a financial institution.

The P2P creates, maintains, and updates the blockchain, recording payment transactions. And the blockchain records and facilitates two willing parties where they wish to trade directly.

All without regulation. All without governments and corporations. And all anonymously.

Some countries, such as India, have prohibited the trade of bitcoin. Some say that they’re banning noncentralized cryptocurrencies because the government can’t trace transactions (or, perhaps more to the point, collect taxes).

But that’s the cynic’s view. The service in itself is absolutely not illegal – as long as where the money goes when it’s transferred isn’t used for illegal activity. But you could say that for all currency.

How does this not immediately fall apart?

Your bank account is an established (and regulated) form of digital currency. You have money (which is represented by numbers in an account), which you can transfer to someone else in return for goods and services. You probably use your cash card or mobile payment system more than you use dollars and coins these days.

So you’re already pretty familiar with the concept of electronic cash. The main difference here is that rather than one organization taking care of your numbers, a collection of computers keeps the numbers safe.

It is a valid concern that anonymity could facilitate criminal activity, although this certainly doesn’t imply that users of Bitcoin have unlawful intent. So you can see why it’s controversial. But no – it’s not illegal.

I’ve heard about bitcoin wallets. What are they?

Good question. And this is where the story gets interesting.

A bitcoin wallet is a dedicated program that stores your bitcoins, in the same way that your physical wallet holds your notes and cards. The digital wallet is stored on your desktop computer or on your smartphone. Bitcoin can be stored on the web, but this raises security concerns.

If you lose your bitcoin wallet, you lose your money, just like if you lost your physical wallet. Except your digital wallet was potentially worth millions of dollars.

There are stories floating around the internet of a sorry gentleman who threw out his old computer and forgot to back up his bitcoin wallet. He’s regularly spotted raking through the trash at his local dump.

If you forget your PIN or password, or you lose your hard drive, or it’s hacked or stolen, the value store becomes forever inaccessible. Experts recommend storing your wallet offline where it’s less vulnerable to ransomware. Just in case.

A regular internet-enabled bank account allows you to access your money (and transfer your numbers) from any computer connected to the internet.

If it’s safer to store your digital wallet offline, that means you can only access your funds from the computer that holds the wallet.

There’s a selection of mobile apps that allow you to control your digital wallet securely.

So how do you spend your bitcoin?

Transactions are recorded onto the blockchain as a file, confirming that “Bob gave Andy 5 bitcoin on [insert date and time here].”

Lucky Andy! What did he do to gain such favor? 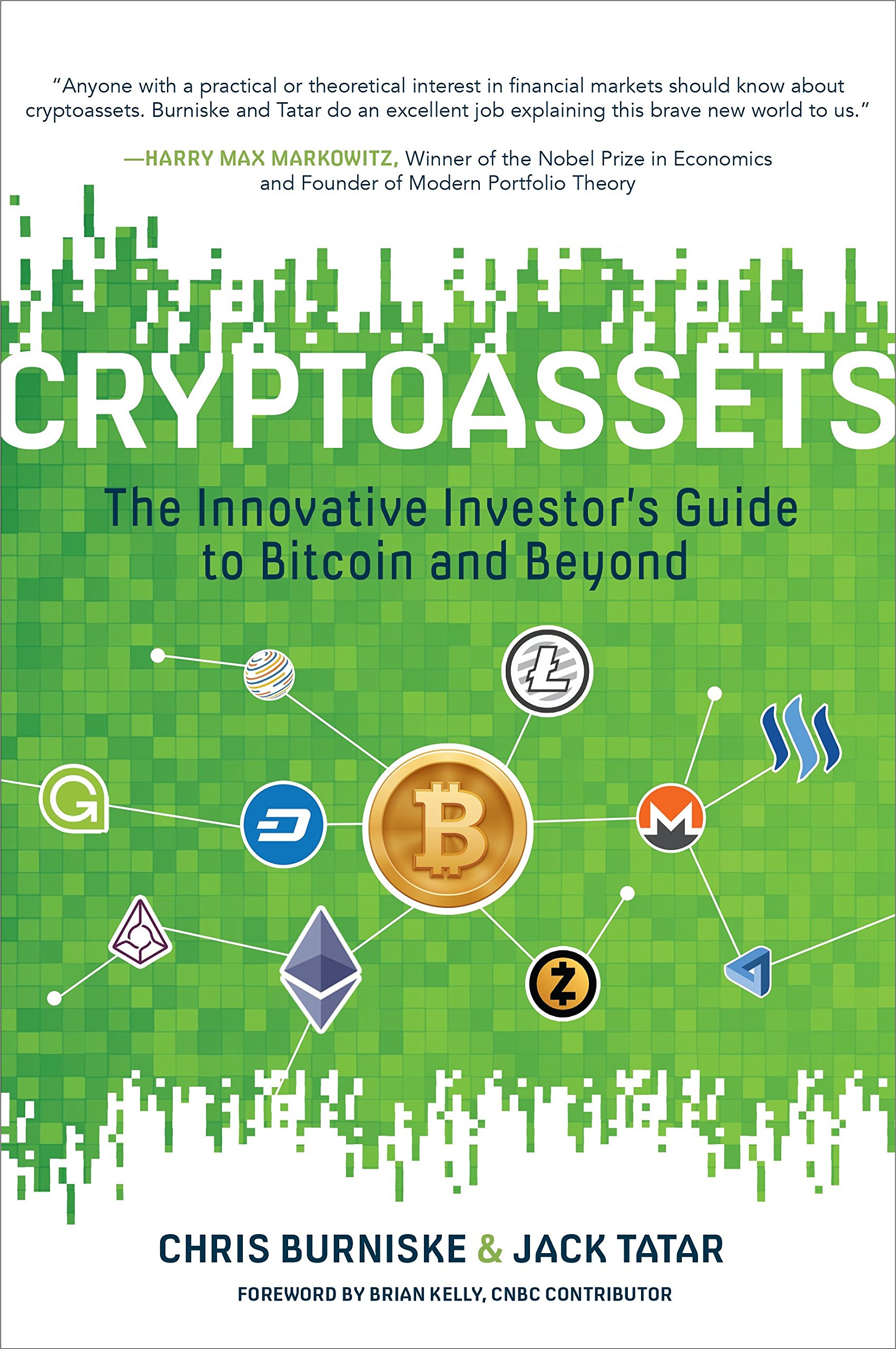 Cryptoassets: The Innovative Investor's Guide to Bitcoin and Beyond

The transaction is signed by Bob’s private, encrypted key and broadcast to the P2P, which validates and records the transaction.

The blockchain is publicly distributed, so it is potentially open to hacking. However, it’s heavily cryptographically protected. The data is divided into multiple small blocks.

Individually the blocks don’t mean anything to a hacker.

The total bitcoin blockchain is estimated at around 100gb in size. The entire chain is required to crack the encryption. And there could be, like, tons of blocks. Thousands. Millions. Superquadrillions.

Hacks have broken into individual wallets, rather than “breaking” the blockchain. A wallet could be compromised, stolen, cloned, or manipulated.

What does the financial industry make of blockchain tech?

The bitcoin bubble may yet burst, but blockchain technology looks to be here to stay.

USC is a cryptocurrency, just like bitcoin, and will be used for international transactions between banks.

USC will be used for financial transfers on a vast scale and won’t be available at a consumer level – at least, not unless you’re dealing with multi-million dollar transactions.

These transactions will be controlled by banks (who are subject to regulation), and they’ll lack the anonymity of bitcoin.

Learn about them now

How is the value of a bitcoin determined?

It sounds a lot, but when you take into account that this is a global currency, and the value fluctuates, this embedded scarcity infers value.

New bitcoin are released daily, at the rate of around 25 coins per 10 minutes. Where the heck they come from is beyond me, to be honest (and perhaps a subject for another article).

But the flow will dry eventually, it has been prophesied, inferring higher value upon existing coins. There are currently believed to be around 16 million in use.

So someone has done well.

Where can I pay with bitcoin?

Amazingly, there are over 100,000 merchants around the world who accept
bitcoin, including Microsoft, Expedia, and Newegg.

It’s rare to be able to spend bitcoin in physical stores, although the likes of Gyft – a mobile gift card app – provides a means of transferring the value of your digital currency into a form accepted by Amazon and Walmart.

Gyft gift cards are accepted in over 200 outlets in the US, such as Nike, Starbucks, and Target.

There are services, such as Shakepay, which convert your bitcoin into USD or Euros, for a fee.

When Amazon starts accepting Bitcoin (notice that that’s “when” rather than “if”), the value is set to increase even further, bringing usage into the mainstream.

It wasn’t that long ago that ordering a consumer item from the internet represented a massive risk, remember? Nobody thought that would catch on! So the future looks bright for Bitcoin. Yes, it could all collapse and devalue, but at the current rate of progress, it seems unlikely.

It might be too late to invest in in bitcoin and make millions, unless you already have hundreds of thousands of dollars. But now you know just enough about bitcoin to dip your toes in the water; don’t worry, it’s warm.

Is your phone making money for somebody else? The rise of the mobile crypto-miners

Are you at risk?